The Future of Coexistence 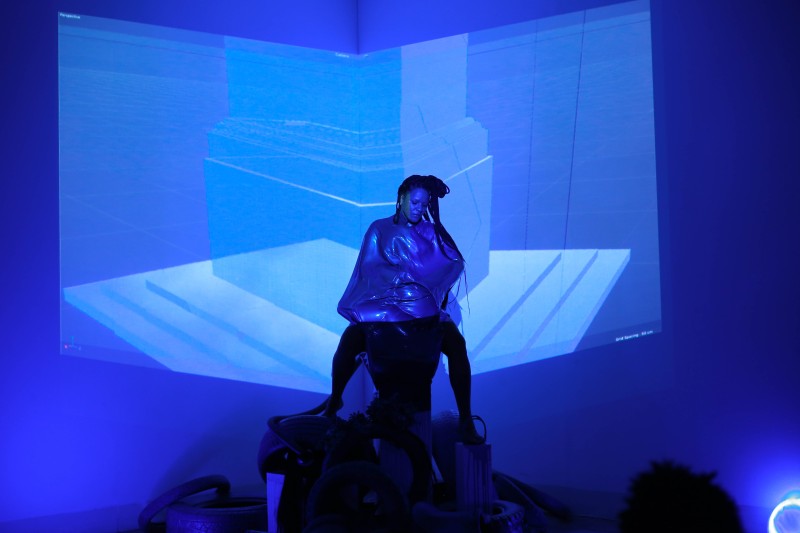 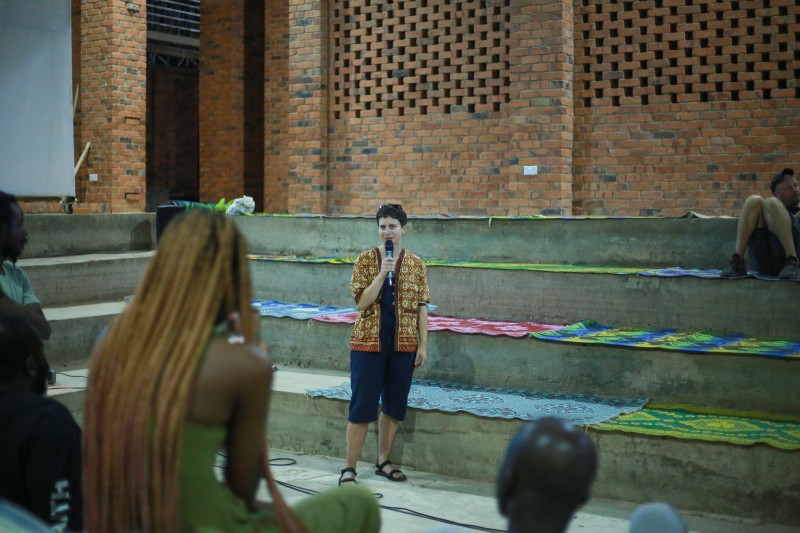 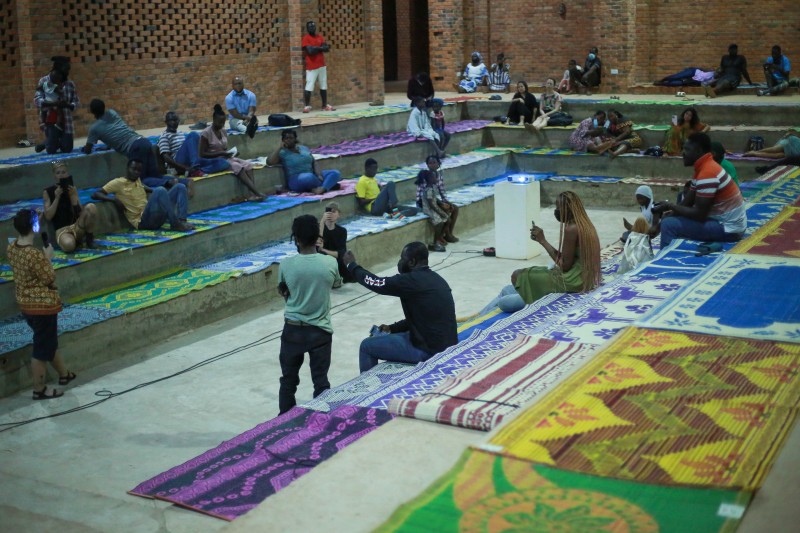 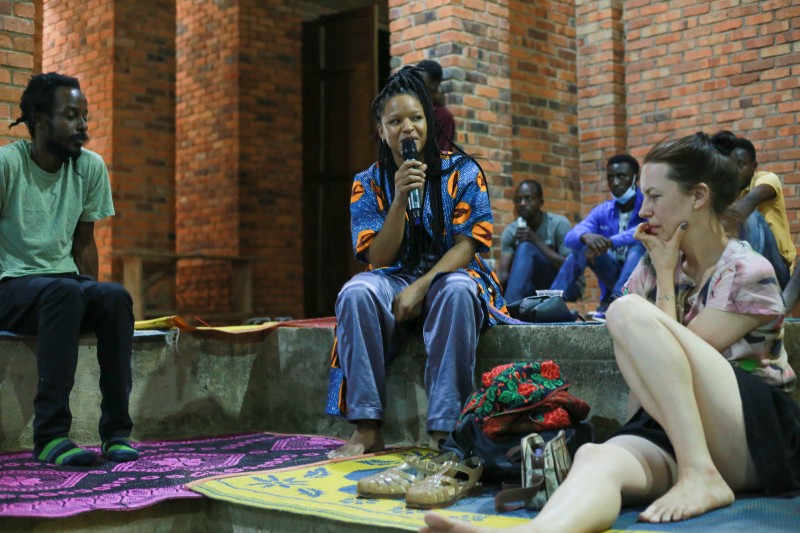 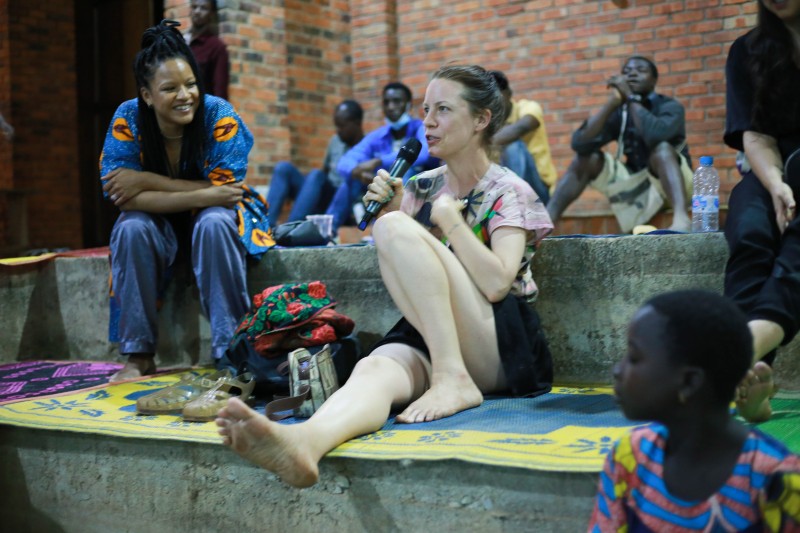 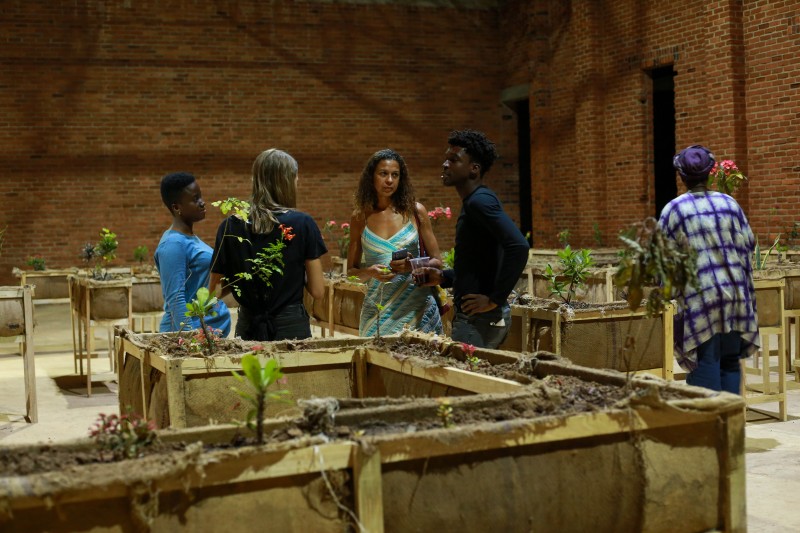 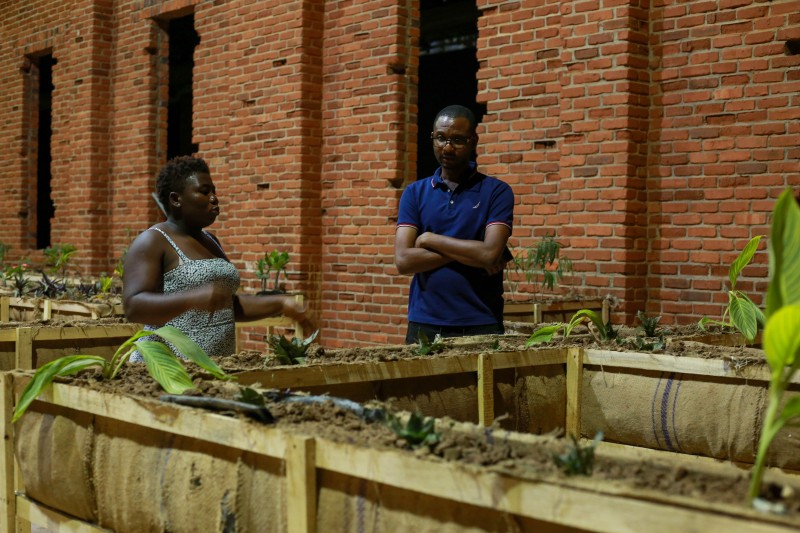 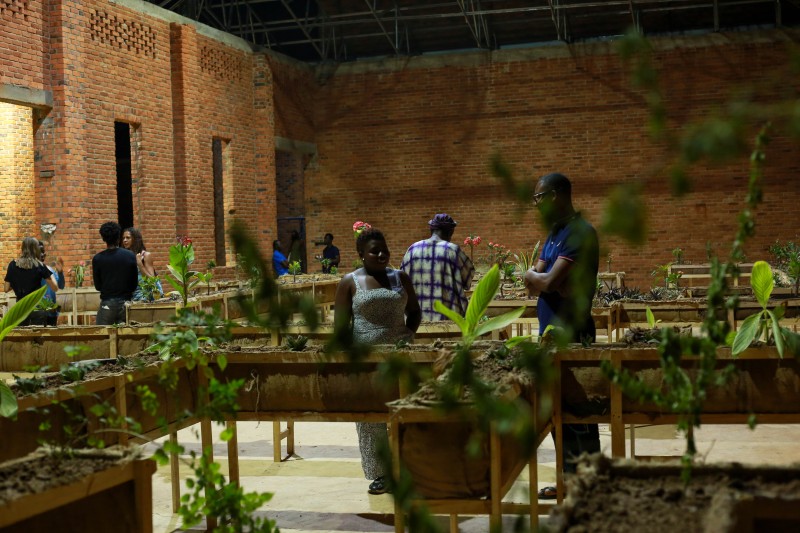 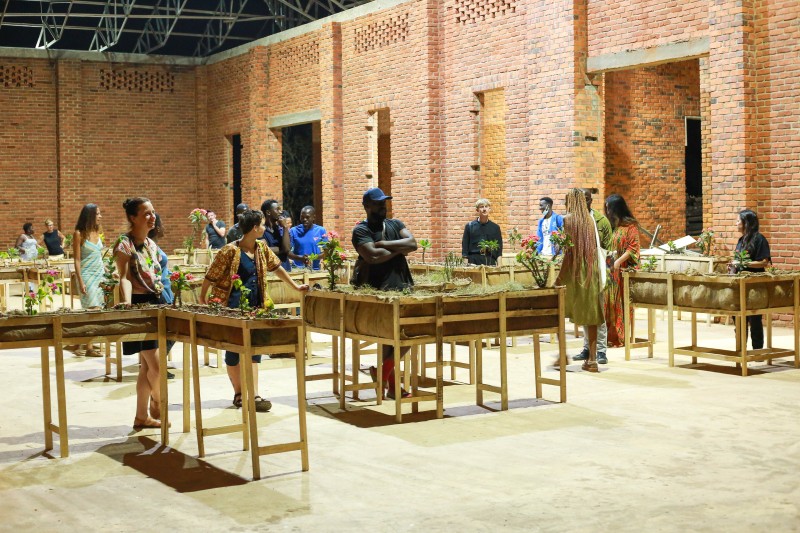 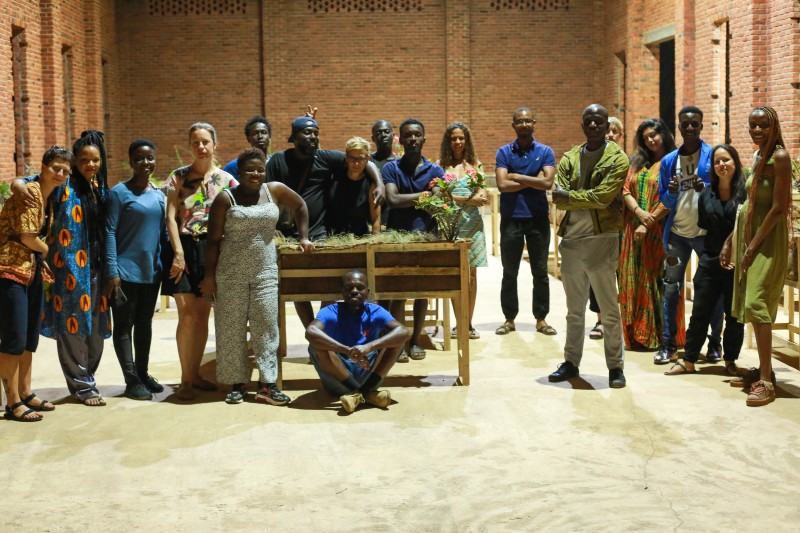 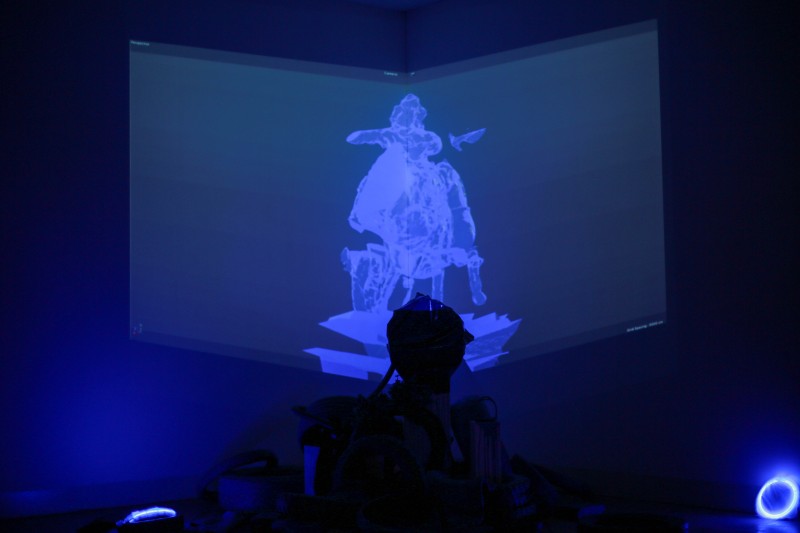 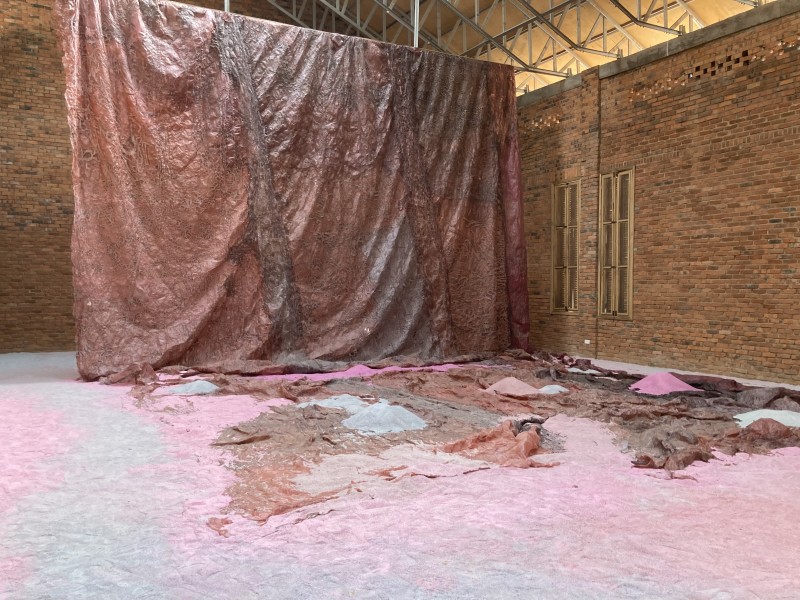 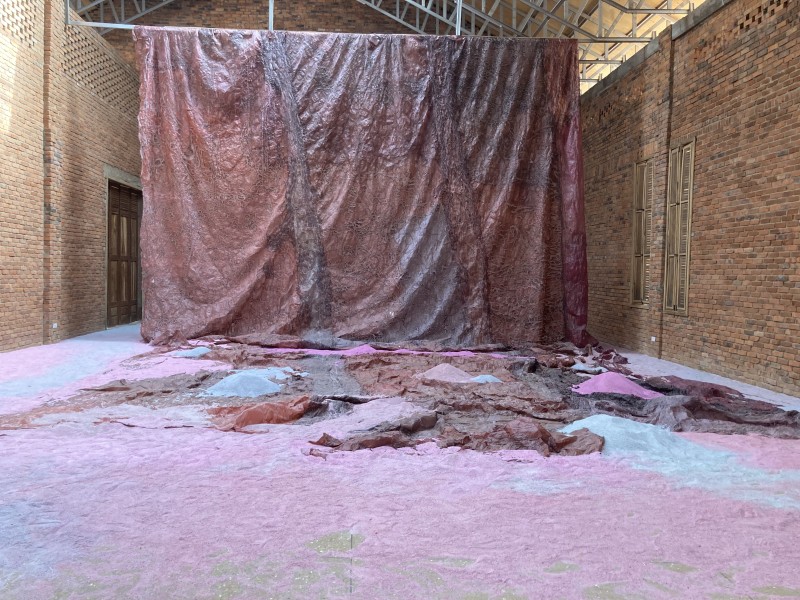 In Red Clay a sculptural, virtual looking, landscape unfolds wastly. It is made of a paste, which is a post-production of various foods: Tuo Zaafi (fermented corn), Tom brown (Roasted corn porridge), wheat flour, fermented cassava flour and gari (cassava grains). There will be purple cassava grains as grains of sand together with the mutated food fabric drape made of the composite materials mentioned. This draped landscape is created to change familiarized human-relations with food. In the line of today's ecological collapses this work is a sculptural experiment retooling existing material.

At Red Clay Sandra Kyeraa has planted a flower maze outdoors, which is yet another path to explore! With this labyrinthic maze Kyeraa challenges the use of earth, flowers, gardening, and grass in a creative way. The labyrinth however, is a Cul-de-sac, a blind road, of soil and beautiful flowers. “Cul-de-sac” is a living sculpture that grows throughout the exhibition dedicated to the excitement and frustration of being lost, to accepting a collapse. This nevertheless may be the beginning of affection and caring?

“to build to bury to remember” by Sarah Ama Duah

In the performance and installation to build to bury to remember, Sarah Ama Duah, who is both an artist and a designer, deconstructs a post-colonial monument, meanwhile she creates another contemporary one with her own body. In her artwork she develops hybrid forms between sculpture and the body - latex monuments. By covering her body with latex and inserting objects underneath, she laments industrial or fetishized forms to her body temporarily in her performance. She thus, while resting on a plinth bathed in black light, creates her own temporary statue with an intense presence, meanwhile existing monuments on a screen behind her pixelate and evaporate. Are there any alternatives to the monuments we know? How do we deal with the void that remains when a colonial monument is demolished? To whom or what do we want to dedicate new monuments?
www.sarah-ama-duah.com

“Walls Have Feelings” by Eli Cortiñas

Walls Have Feelings is a hypnotic montage of cinematographic, photographic and literary references wired together with excerpts from YouTube videos, TV series, advertisements, generic footage, animations, and newly-filmed material. These elements generate a complex constellation of different devices, modes of consumption, reception, and forms of power inherently linked to each other. Cortiñas’ work wires together past and present, dictatorships and neoliberalism, physical and cognitive forms of exploitation. In doing so, she is shedding light on the multiple processes of silencing and concealment pursued by history in favor of the dominant economic system with its limitless pursuit of productivity and profit.

This complex power structure is synthesized by the wall, an object embodying multiple forms of separation (between private / public, legality / illegality, possible / impossible), concealment, exploitation, and national borders. But it is also an object that has been charged with all these significances by its use throughout human history. What does the wall feel? Cortiñas’ work analyzes a wall’s possible standpoint to observe human history.

"What Is Poetry To You?" by Cecilia Vicuña

In What Is Poetry To You?, Chilean artist Cecilia Vicuña, asks beggars, sex workers, policemen, and passersby repeatedly the question “What is poetry to you?”. The surprising answers she gets reveal not only the richness of the oral culture in Bogotá, Colombia, where she shot this film in 1980, but also how poetry inhabits our societies in all forms, not necessarily linked to a particular cultural, academic or intellectual space.

“And That Ocean Too, Is A Fiction” by Sikarnt Skoolisariyaporn (TH)

Sikarnt Skoolisariyaporn is an artist from Thailand whose practice involves moving image, performance, text, and installation. Her work examines notions of human and non-human history embedded in geological space and time: she is interested in the history of mankind as remembered by the earth and its landscape. In the video work “And That Ocean Too, Is A Fiction”, she questions the museum as an imperialist and colonial institution and renders it to the usual ethnographic agents. Not only who looks, but how this look is canonized by an exhibition and institutional practice is a constant question in her work. Skoolisariyaporn's examination is an institutional critique, which speaks not only about the historical, but also the neo-colonial implications of most exhibition practices.